Based on the surrealist novel by Michel Faber, the film adaptation was much different than the book. I admired director Jonathon Glazer’s experimental style and how images drove the story instead of plot or dialogue.

The film Enemy based on Jose Saramago’s novel The Double was a nicely surreal and non-linear film I admired quite a bit. It’s been a while since I’ve seen a film with sex and political power themes that stayed with me far past the viewing. The ending here is nicely cryptic and creepy.

Lately for many reasons I feel I’ve been living inside of a Philip K. Dick novel, so I’ve been rereading a couple of my favorite–Flow My Tears, the Policeman Said and A Scanner Darkly.

What does a scanner see? Into the head? Down into the heart? Does it see into me, into us? Clearly or darkly? I hope it sees clearly, because I can’t any longer see into myself. I see only murk. I hope for everyone’s sake the scanners do better. Because if the scanner sees only darkly, the way I do, then I’m cursed and cursed again. I’ll only wind up dead this way, knowing very little, and getting that little fragment wrong too.

And Richard Linklater’s film adaptation visualizes Dick’s themes of shifting realities–internal and external–and also shifting identities so perfectly in its animation. It’s funny how today we are reading post-modern novels with shifting narration, and Dick’s work was seen as genre and a lesser form of novel writing back in the sixties and seventies. I’m looking forward to tracking down his so-called “straight” novels.

Note to self: Writers make choices.

Spending time with Nick Flynn’s book and also watching some clips from the adaptation: “We all need to create the story that will make sense of our lives. Make sense of our daily tasks.” 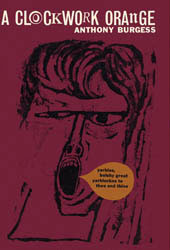 ost surprised at the Bart/cupcakes clip. And I guess I should be specific and say these are Stanley Kubrick A Clockwork Orange references and not Burgess references. I’m finding the film and the book to be so far from one another in many subtle ways.

Today in Lit 150 we are discussing needless qualifiers. I like the Frank Darabont/Tears in Rain soliloquy example from Blade Runner documentary:

Spent time this afternoon with Gerald Nicosia‘s Huffington Post article about his experiences working with the film makers of the On the Road film adaptation. I’m interested in his opinion because I enjoyed his book Memory Babe so much. Here he writes candidly about setting up a Beat boot camp for the actors and also becoming a bit starstruck. And I have to agree the Jose Rivera script had quite a bit missing in terms of Kerouac’s mad spirituality. I was sad not to see the Old Walking Saint character and the “Go moan for man” scenes or any stream of consciousness style scenes with voice-over narration. I have to say now that I’ve seen the film I’m more excited to see the Searching for On the Road documentary shot alongside Salles’ film. Also I wonder if Ann Charters has seen the film.

sunday morning philip k. dick segment on to the best of our knowledge

Spending time this Sunday afternoon listening to Philip K. Dick segment on To the Best of Our Knowledge. I was most struck by interview with Ann R. Dick, wife #5, and also David Gill interview on film adaptations of Dick’s work.

Love this quote: “Reality is that which, when you stop believing in it, doesn’t go away.” — Philip K. Dick

I’m remembering how the novel deals with Duluoz’s alcoholism.