I first read the short fiction of Luis Alberto Urrea in graduate school. The discovery of a prolific Latino author whose work moves so adeptly from English to Spanish was important to my development as a writer. I enjoyed his collection of short stories Six Kinds of Sky and the keen worlds and characters drawn, his humor and surrealist edge. At the time I was struggling to capture Spanish speaking folks and the stories from the old neighborhood of my youth, struggling to make my work less obvious and overtly political. And the influence of his work stays fresh in my mind.

In reading Urrea’s most recent novels, The Hummingbird’s Daughter and its sequel Queen of America, I am pleased to find these lengthier works equally representing for me what writing should aspire to be.

Over the course of two novels, set in the 1880’s to the turn of the century, the incredibly dynamic character of Teresita the Saint of Cabora, the Mexican Joan of Arc, rises from abject poverty and abandonment to her place as spiritual leader. Described as a “saint with grit” by Stacey D’Erasmo of the New York Times Book Review, Teresita survives rape, returns from the dead and learns to practice ancient magic, and travels to the United States after the Mexican-Tomochic rebellion. In the sequel Teresita survives as a celebrity of sorts travelling and experiencing the United States—St. Louis, San Francisco and New York City—and she marries and divorces. She also survives a medical industry out to exploit her healing powers. All based on historical events and Urrea’s research. 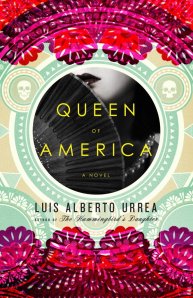 The most influential aspect of the two books for me though is the form, the lyrical and dream-like passages. The masterful use of third person limited omniscient narration. How the dreamscape that is Urrea’s writing style creates so many varied characters and experiences in an incredibly wide and brilliant spectrum. From field hand, Indian healer, to Teresita’s Mexican landowner father, Don Tomás, to the bandits, cowboys and tycoons, the cast of characters represents the complicated nature of hierarchical class structures at play in pre-turn-of-the-century and pre-revolutionary Mexico. Masterfully, Urrea immerses us in Teresita’s myth across a multitude of voices. I admire the novels’ contrast of authorial voice and character in nearly every chapter, creating this Mexican and American border world from inside and out, and more importantly, in terms of social class, from quite literally the bottom up. (Urrea’s lively and playful performance in the downloadable audiobook versions only enhanced my experience of these distinct voices.)

Ultimately, I have to admit to taking advantage of Urrea’s skill—stealing stratagems of technique once again into my own struggling work. I’m thinking of the author and critic Jim Harrison’s words: “One finds and understands his own voice finally through the voice of others.”

I tell my Midwest community college students that the key to nonfiction is in the facts and that creative nonfiction—as well as fiction—is in the telling. And the power from Urrea’s work perhaps is that he devoted twenty-years of research and study of Mexican political, cultural and religious history as well as struggled with the form. And in many other historical novels or footnoted historical books, the political thought becomes so blatant and relentless that readers stop hearing it. Yet in Urrea’s two novel saga, the insight into Mexican, American Indian and American history, I believe, along with the shifting voices create an inextricable link between human experience, political conflict and historical socioeconomic conflict. Another lesson for writer in the merging of form and content to craft a meaning greater than the sum of its parts.

John Paul Jaramillo’s debut story collection The House of Order was named a 2013 Int’l Latino Book Award Finalist, and his most recent work Little Mocos is now available from Twelve Winters Press. In 2013 Latino Boom: An Anthology of U.S. Latino Literature listed Jaramillo as one of its Top 10 New Latino Authors to Watch and Read. He is currently a professor of composition and literature at Lincoln Land College-Springfield, Illinois.