I’m going to begin this post by saying that I’m writing this in my apartment about ten feet from railroad tracks, which is just south of downtown Springfield Illinois. It’s afternoon, saturday. Every so often I can hear a train  wth coal cars slam past in a great cry. The roar of the train rises and it bursts over the trees. If it was after midnight it would’ve woke me. It’s almost thrilling to hear despite the annoyance and consistant unpredicatability.  I’m sitting here facing the window trying to revise what I’ve called Monte Stories. I’ve been trying for several days now, ever since thinking I have somewhat of a first draft. I expect as a writer of some sort to return to everything I’ve worked on though the energy isn’t always there. And I should be working on my syllabi.

Anyway Monte Stories is about Carlos Montoya who is and isn’t my grandfather. I mean the man in San Luis, Colorado whose face I’ve seen a million times in the Abuelita’s house just above her wall cabinets–well this man isn’t the Carlos I’m thinking about today. Carlos only exists in the drafts I’ve been working on and is my total creation. So as for revision it is less memory and more creation of moments I want to put him into. I gave birth to this guy and somehow I know he needs to die. I know he needs to go away and leave me alone so I can work on other things. But for now I know I have to go back line by line and section by section and start over again and again trying to create more moments to predicate his life and failures.

So my revising is under way and at a stop sign right now. More like the truckito has flipped and the tires are spinning. I just feel as if I need some time to think and get back to the drafted sections. Specifically sections between Carlos and his daughter Bruna. Specifically the sections of Felipa’s letters to her daughter Bruna. Specially more on the ending and the death of Carlos. And when I’ve been stuck in the past I’ve picked up the phone or driven over the Abuelita’s. I’d sit down at her kitchen table and try and steal the stories from her. I have so many notes from afternoons like that. But now she’s gone the way I know Carlos needs to go. She’s gone and I have to figure it on my own. The revision or the re-envisioning has to be done and today as I sit I am more consumed with the loss of the old woman than with the writing of a fictional Carlos.

Here’s Carlos as a young man. If you’re interested. 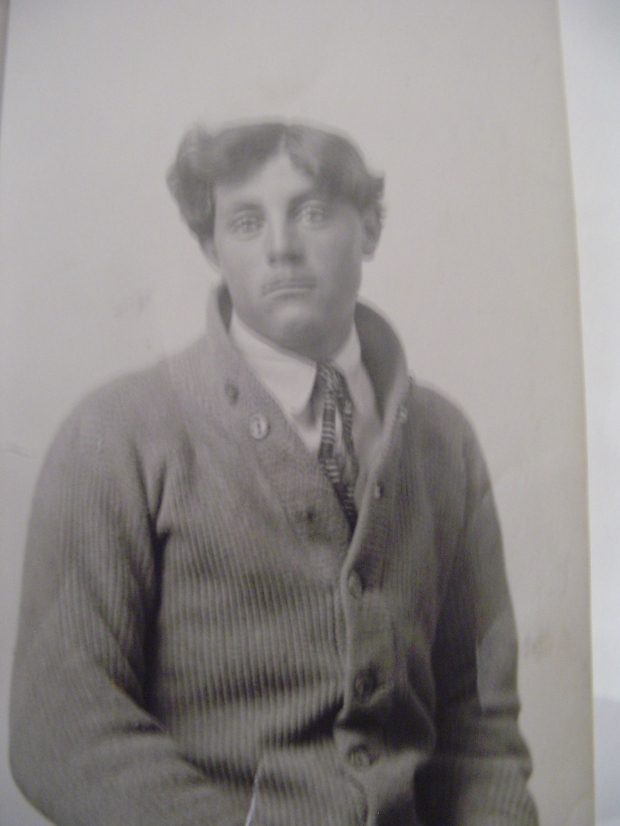 The old woman always used to say I looked like him though he wasn’t young when I met him. I feel as if I am sort of trying to look at life through him in these revisions. And with the old woman dead and gone I’m not sure who to ask the questions and I feel such a loss of the stories and also the connection I had to family. And I don’t think I have a lot of connection to family except through the writing. So before I go on to what I want to talk about I have to mention that yestrday while I was doing pretty much the same thing I’m doing today I recieved a phone call and a voice mail from a woman who obviously reached the wrong number. It was a woman who sounded like a black woman with a heavy southern accent and a very unique voice. Anyway she was asking for a party named Willie. It was a wrong number and I didn’t recognize the number so I didn’t pick up. I hate to talk on the phone. Anyway I went back to my desk and my work and then I couldn’t resist the temptation to listen to the voicemail over and over. The voice was so desperate and saddened that Willie hadn’t answered. SHe mentioned hse was at his house and had some lonsome desperation in finding his house without him. It was the afternoon and in the middle of a heat index warning and I wanted to call her and explain to her the situation though I didn’t. So I started to draft some notes–stealing the moment for fiction.

I wrote the sentence:

Bruna! This is Felipa and I’m here at your house waiting for you! Where are you! I’m here but I don’t see yous home!

–and then I found that my character Felipa couldn’t have left a message for her daughter Bruna who is being raised by her stepdaughter and I couldn’t use this in my writing and I became very frustrated…but I also started thinkin I have to stop adding and start revising some time soon and became more and more stifled with my slow process of writing and revising. Anyway the process is confusing sometimes…Maybe Felipa should write letters, I thought.

It begins with letters. About a dozen or so handwritten and very cryptic looking since Felipa hadn’t written anything in years. She wasn’t much for store bought greeting cards because of her age and began writing to her only daughter, Bruna Montoya, in the summer of 1960.

Then I started to think about one of my favorite Raymond Carver books called Fires and how many times I’ve read his essays on adding charcter’s into stories or characters being influenced by wrong numbers he’s received. ANd I pulled the book out again and started rereading sections and again further away from revising. And as I was reading about his influences–a writer I admire very much–I started thikning about how my influences. And I have to say the biggest influence on my writing has to be my family and my misunderstanding of their relationships and how they missed connections with one another and then I thought of my family and how I missed connections with them.  And how these missed connections seem to match my missed connections in the fictive space or the trajectory of the story and how I need to make those connections or tie those threads as my writing teachers have told me… Anyway today I am sitting here and stil ltrying to tie those threads…